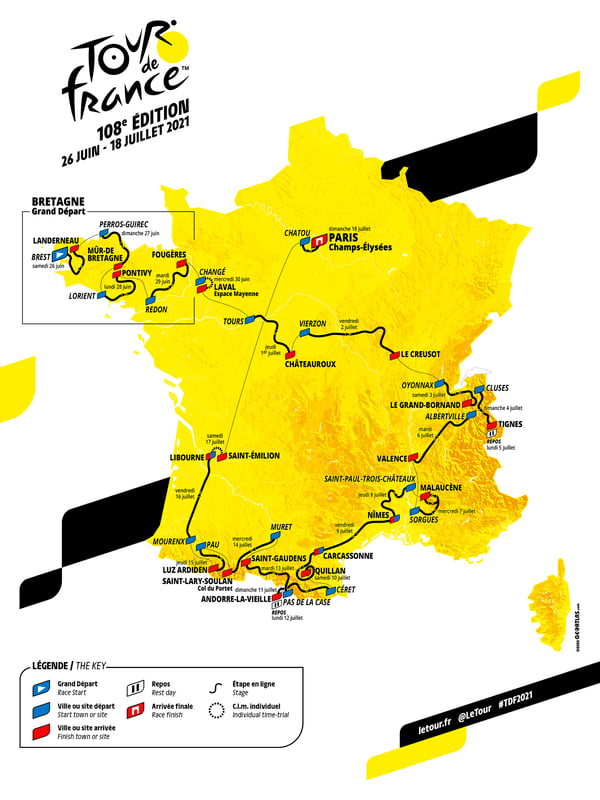 Next year’s Le Grand Boucle will depart from Brest in France’s northwesternmost region, Brittany. Four stages will take place in the region including something for the puncheur’s, sprinters and climbers, with a double loop up the Mur-de-Bretagne on Stage 2 and an expected thrilling finale.  The women’s La Course by le Tour de France will also be held on this day and include the same testing finish!

Mummu Cycling will host a jam-packed Grand Depart experience covering the first three stages in Brittany as well as enjoying the best of Brittany’s food, wine and scenery.

Stage 5 marks the tour’s first race against the clock, featuring a 27km time trial to Laval and the first real opportunity to shake the GC standings.

The journey to the Alps will then begin with several undulating stages, including the longest of the race, 248km on Stage 7.

By Stage 8 the Alps will be upon us and the climbs will come in waves! First up will be the Col de Romme and Col de la Colombière, before a swift descent into Le Grand-Bornand.

The next day in the Alps features a succession of tough ascents, including the Col des Saisies, Col du Pré and the Cormet de Roselend, before the 21km slog up to the stage finish in Tignes.

Our guests will be spoiled on our Loire to Alps experience, combining exclusive race viewing, the best of the Loire Valley and finishing in the Alps for the Tour’s most exciting climbing stages.

Following the first rest day, an opportunity will present itself to the sprinters on Stage 10 before heading back into the mountains on Stage 11 with a spectacular return to Mont Ventoux, after a four-year hiatus. The iconic climb will star not once, but twice on the 199km stage.

The route will then suit the fast-men for a few days, travelling towards the south of the Pyrenees over mostly flatland with stages to Nîmes and Carcassonne.

The Pyrenees mountain madness begins on Stage 14 including the trio: Col de Montségur, Col de la Croix des Morts and Col de Saint-Louis. Stage 15 then ventures into the Catalan Pyrenees, taking the riders over the highest point in the race, the Port d'Envalira, finishing in Andorra la Vella and marking the first and only detour out of France.

The second rest day will then follow before facing an undulating day to Saint-Gaudens, followed by several challenging stages through the heart of the Pyrenees.

Take in this final epic week of Pyrenees racing on Mummu Cycling’s Pyrenees Peaks Tour, or take it all the way to Paris on our Pyrenees to Paris experience.

The sprinter’s will then have their final opportunity before Paris on Stage 19, while the GC contenders have their eyes on the Stage 20 penultimate 31km Time Trial, raced through stunning wine country into Saint Emilion.
Stage 21 will traditionally lie in Paris, finishing along the Champs-Élysées where the 2021 Tour de France champion will be crowned!

The countdown is ON. It’s certain to be a cracking one.

Mummu Cycling is an Official Tour Operator for the Tour de France, offering fans the opportunity to experience the best cycling, food, wine, and scenery France has to offer. In 2021, Mummu offers a series of tours designed for riders and spectators alike:

PRE-BOOK NOW TO ENSURE YOU DON'T MISS OUT ON YOUR DREAM EXPERIENCE!

The Tour de France is the pinnacle event of cycling and one of the greatest, largest scale sporting events across the globe. The three week race travels across some of France’s most stunning, yet test..........
END_OF_DOCUMENT_TOKEN_TO_BE_REPLACED

2020 was an immensely challenging year for everyone with the devastating effects of Covid-19 worldwide, which put a significant dint in the economy and travel plans on hold. Now that vaccines are bein..........
END_OF_DOCUMENT_TOKEN_TO_BE_REPLACED