The 2022 Tour de France route has been announced and we couldn’t be more excited about what lies ahead for next July. It’s going to be one hell of a 109th edition and we will be there with bells on from the Grand Départ in Copenhagen, onto the brutal cobbles of Roubaix. We will then make our way through the Vosges Mountains to see the first summit finish up La Planche des Belles Filles, before cruising into Switzerland for some scenic action. Next up, we will take in the very best of the Alps – including the legendary Alpe d’huez.Yes – It’s back! The Pyrenees will follow where summit finishes up the Peyragudes and the Hautacam will be the key to some late race fireworks. The fun won’t end there as we travel on to watch the penultimate, decisive TT before cruising into Paris for the always fabulous Grand Finale. 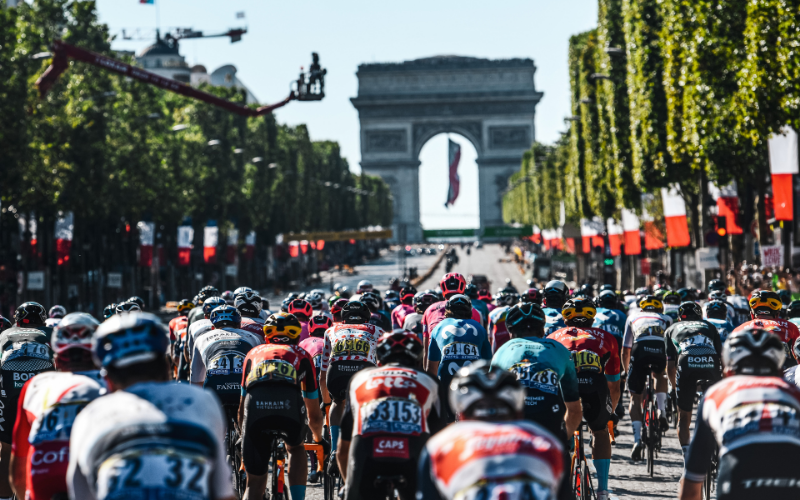 BONUS. Next year, we are thrilled to share that we will be running an experience dedicated to watching the very best of the Tour de France Femmes – an 8 day stage race that starts in Paris before the men’s final stage and ends in style with an epic mountain battle up La Planche des Belles Filles.

If you are interested in joining us at the 2022 Tour de France or the Tour de France Femmes, then we strongly recommend pre-booking with us NOW to receive early access to our complete trip line-up, tour itineraries and early bird discounts before launch! First in, first served, and we’re expecting next year to be BIG.

The 2022 Le Grand Boucle will depart from the world’s most bicycle friendly city of Copenhagen, Denmark where the opening three stages will take place. First up – a fast and furious 13km race against the clock through the spectacular city streets, presenting a fine opportunity for the time trialists to claim first Maillot Jaune honours. Stage 2 will ensure there’s no time for mucking around as the race travels via exposed open terrain, ending on the Great Belt Bridge into Nyborg, where cross winds are almost certain. The final stage in Denmark will be another great early opportunity for the fast men.

The first rest day will take place the following day as the riders travel into Northern France, straight to the coast for Stage 4 that ventures from Dunkirk to Calais, where wind could again spice things up. Stage 5 will be a tense day for everyone, and especially the GC contenders as the race heads to the rough pavé roads of Roubaix, including a gruelling 20km of cobbled roads, ending the day in Wallers-Arenberg. From there, the race skirts into Belgium for a stage start in Binche that concludes in Longwy with a short-steep climb lying at the finish. Switzerland is the next neighbouring country to pay a visit to as the race veers South to Lausanne, taking in some beautiful scenery along the way. The next day, the stage will start at the UCI headquarters in Aigle on route to the Alps leading into the second rest day!

The Alps madness properly begins on Stage 10 from Morzine to Megéve, soaring into the Portes du Soleil and Pores de Mont-Blanc ski areas before a swift downhill finish. Stage 11 features a relentless day in the mountains including the Telegraphe, the Galibier and what will be an epic summit finish up the Col du Granon. This will be backed with another adventure through the Alps on Bastille day as Stage 12 travels from Briancon over the Galibier, the Col de la Croix Fer, ending up the mythical 21 hairpin bend Alpe d’Huez that returns to the race for the first time since 2018.

Stage 13 offers a much deserved break from the mountains as the race veers West to Saint-Etienne, presenting a chance for the sprinters, or potentially a breakaway and possible echelon action if the wind picks up. From there, the route travels down into the South of France, with Stage 14 finishing on the Mende airstrip, where a small climb lies. The next day, expect stunning surrounds as the route takes in the sunflower fields from Rodez to Carcassone and what will very likely be a thrilling sprint battle.

The final rest day follows before delving right back into the mountains where the best of the Pyrenees awaits the peloton for the race’s final week. Stage 16 covers rolling terrain for most of the day with two tough climbs; the Port de Lers and the Mur de Peguère nearing the finish before a downhill dash into Foix.

Two back-to-back testing mountain days then await, providing the final opportunities for the GC riders to make their moves up the climbs. Stage 17 features the Col d'Aspin, Hourquette d'Ancizan and Col de Val Louron-Azet all before the summit finish up the Peyragudes; last featured in 2017 when Romain Bardet stole the show atop. Stage 18 kick starts in Lourdes, covering the Col d'Aubisque and the Col des Spandelles on route to the final HC climb of the race – the brutal Hautacam. Ouch!

Stage 19 from Castelnau to Magnoac will likely be a day for the sprinters and the Green jersey fight, backed by the penultimate Stage 20 TT that includes an undulating 40km route from Lacapelle-Marival to Rocamadour where two short climbs will be faced towards the finish.

Then of course, tradition stands and the peloton will head for the beautiful city of Paris, rolling onto the iconic Champs-Élysées to close out the 109th edition of the Tour de France.

The Pivotal Pyrenees: Tour de France 2022 The 2022 Tour de France is destined to be another highly entertaining edition featuring an as-always challenging route travelling over some of the country’s h..........
END_OF_DOCUMENT_TOKEN_TO_BE_REPLACED

The Legend That is Alpe d'Huez Alpe d’Huez is a climb that every cycling fan around the world knows. It’s a true icon and an absolute must bucket list climb for all enthusiasts. The climb is home to t..........
END_OF_DOCUMENT_TOKEN_TO_BE_REPLACED