Opening weekend is here and we couldn’t be more excited to kick back on the couch, beer and frites (let’s be serious – hot chips) in hand ready to watch the action on our favourite cobbled roads of Flanders.

First up is the traditional opener, Omloop Het Nieuwsblad. Returning for its 76th edition and with surprisingly good weather predicted, the pros are in for a promising day of bike racing.

The men face a 200km route including a daunting 13 climbs and 14 cobbled sectors. Elbows will shoot out and the fight for the front will really kick at around 30km in, with the first climb at the 40km mark. From there, the action will be ongoing as they face berg after berg, with a few gnarly sectors in between. Nerves will no doubt be at their peak as the first race of the season for many. Expect fireworks!

The final 60km will include a relentless 7 climbs, including the Muur and Bosberg, before a final 13km run into the finish in Ninove where a bit of cat and mouse could well go down.

The pro women will be lining up for the first time this season, anticipation at its greatest as many hit the start line in fresh team colours, questioning whether they’re race ready following the shortened off-season.

They will follow a similar route to the men, covering 126km that includes 10 climbs and 5 cobbled sectors, with the same challenging Muur – Bosberg finale.

Last year, the unstoppable Annemiek Van Vleuten did what she does best and soloed away in the earlier stages of the race, with 100km still remaining and was never to be seen again. This year, she may be a little more challenged with the likes of World Champ, Anna Van der Breggen, Marianne Vos and a string of other top contenders chasing the win.

The men will back up a fiery opening to the cobbles, with Kuurne-Brussels-Kuurne the following day, providing a nice opportunity for the sprinters. In previous editions the race has been won from bunch sprints, to small groups and solo victors, like last year’s champion, Kasper Asgreen who dramatically broke away with an impressive late race flier to just hold off the chase group behind.

Although a flatter day than the Omloop, it still features a number of tough Belgian bergs, including the Oude de Kwaremont, the Kruisberg and beyond. With a 50km flat run back into Kuurne, however, there presents a nice opportunity for the sprinters to find their way back if they have the support and the legs to do so.

As always, we’re expecting an absolute thriller for the first cobbled races back. Bring on the action. 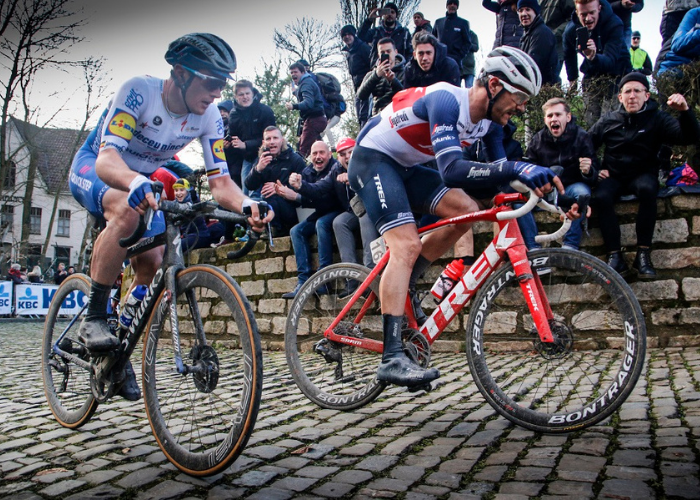 He recently won Stage 1 at the UAE Tour in Abu Dhabi, but was then swiftly returned home after being pulled from the race due to a positive Covid test within his team, Alpecin-Fenix. He’s now clear to line up this today and moves right up on our list as the top man to watch. The man is quite simply unstoppable and since his impressive Tour of Flanders victory last October, and reclaiming his Cyclocross World title last month, his winning streak could well continue – confirmed last week at UAE. 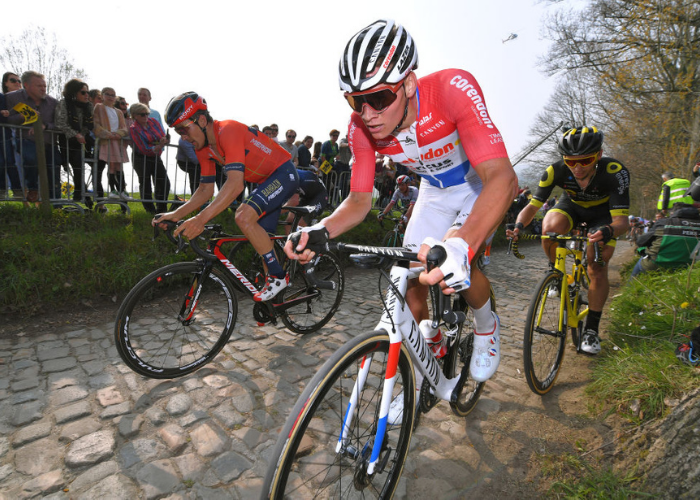 World champ, Julian Alaphilippe will be lining up in the rainbow stripes as a man on a mission, also in fine early season form having recently placed second at the Tour de la Provence. Having proved he’s quite the successor on the cobbles last season, he’ll be heavily marked and part of a very strong Deceuninck-QuickStep, well known for their Classics strengths. He’ll be in great company with 2020 Kuurne-Brussels-Kuurne champ, Kasper Asgreen, 2019 Omloop Het Nieuwsblad winner, Zdeněk Štybar and classics specialist Yves Lampaert all on his side.

He’s won just about every classic there is, the last Paris-Roubaix there was and the Omloop twice, over a decade ago in 2006 and 2008. We’re confident he’s still got it and will be rocking up ready to battle for the win. Between himself and his teammate, Tim Wellens who recently won the Étoile de Bessèges, they’ll be in for a good shot. Fast-man John Degenkolb will lead the team on Sunday for KBK. 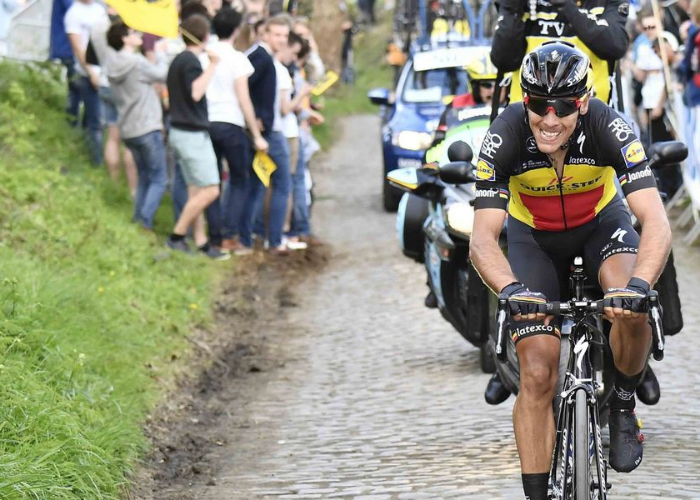 Lining up for the first time in his AG2R Citroën colours, Greg Van Avermaet will be highly motivated to kick off the new season with a win. He’s no stranger to cobbled success and will have the added power of experienced Classics rider, Oliver Naesen to work with when the going gets tough. 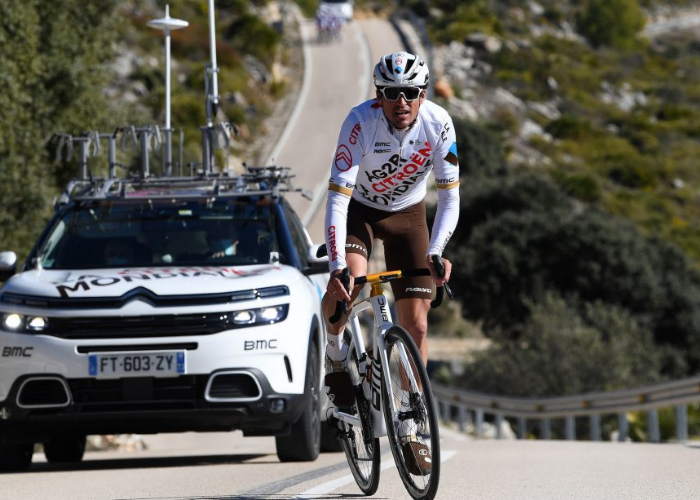 He’s last year’s Omloop het Nieuwsblad champion and won Kuurne–Brussels–Kuurne in 2016, confirming he’s the only man lining up as a former winner of both Opening Weekend races. The Belgian classics specialist will be chasing a consecutive victory, with the added firepower of former World Champion, Mads Pedersen and Edward Theuns. 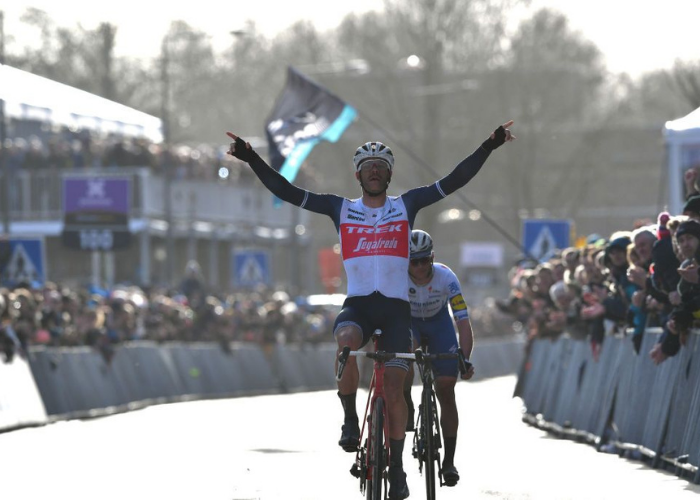 This weekend, we’ll get to see former world champion, Annemiek van Vleuten line up for the first time in her new Movistar colours. After 5 seasons with GreenEDGE Cycling, it will be interesting to see how she fears. Knowing her style and her winning ways, she’ll be shooting straight for the top step. Will she be able to ride away as early as 100km to go though? We think not after reviewing the star-studded start list, but time will tell! 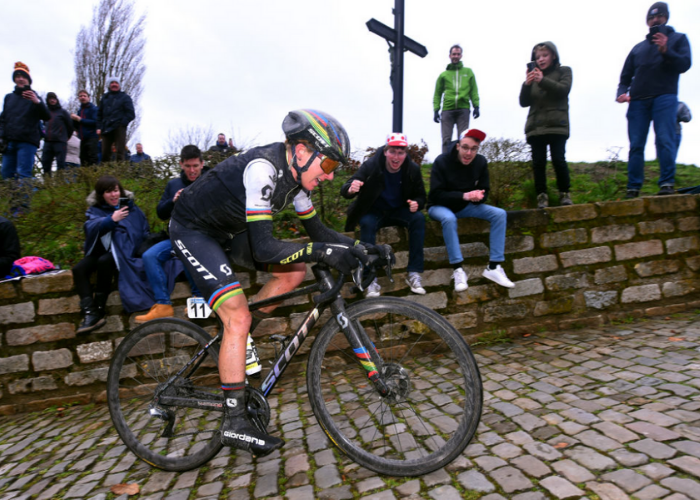 Fellow countrywoman, Anna van der Breggen will likely be van Vleuten’s biggest threat. As the current World Road and TT champion, she ended her 2020 season on an absolute high, going on to win Fleche Wallone in her fresh rainbow stripes, for the 6th consecutive time. Also lining up with a fresh look for Team SD Worx (same team, new sponsors), she’ll be raring to hit the ground running in 2021. Backed by a very strong team of Classics specialists, including Chantal van den Broek-Blaak.

Former World Champion Marta Bastianelli was second in last year’s edition and is well known for her fiercely fast sprint and gritty ability to battle over climbs to finish with the front guns, especially punchy Belgian style bergs. If she arrives to the finish at the head of the pack, she’ll be the woman to beat. 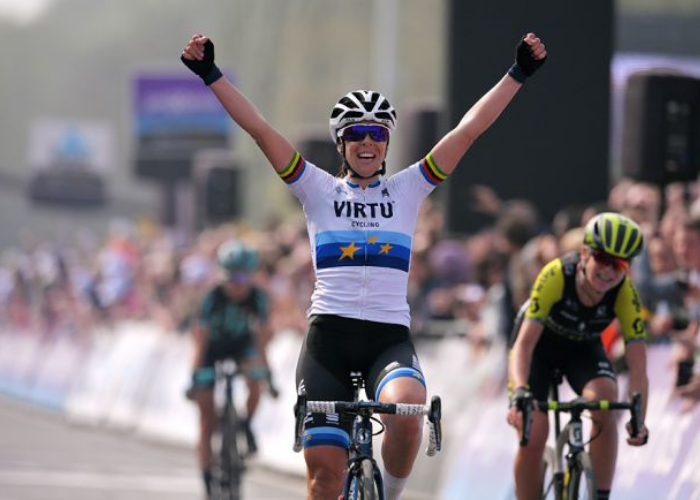 Lizzie Deignan, also a former World Champion proved she’s back to her winning ways last season, taking out La Course by Le Tour de France, as well as Liège–Bastogne–Liège. As a former winner of the OHN in 2016, she’ll be looking to make that two this weekend, joined by her fiercely strong Trek-Segafredo team mates. 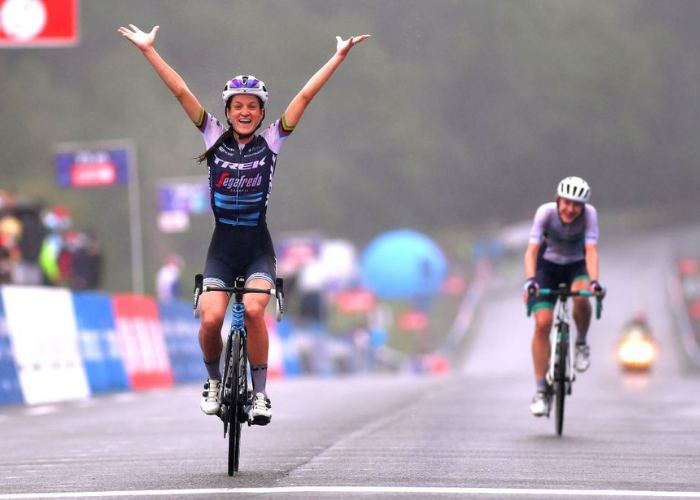 It’s hard not to include the legend that is, Marianne Vos. Having won every race there is to win throughout her highly decorated career and confirming she’s back to her A Game in 2020, claiming three stages at the women’s Giro - she’ll no doubt be right back up there contending top step today in her new Jumbo-Visma colours.

Although we won't be attending this year's Spring Classics, we are hopeful that our return will come this September for the Flanders 2021 Road World Championships, expected to be one of the greatest editions of all time. Secure your place here.

To learn more about what we have planned at Mummu Cycling this season, read our latest 'The Races are on the Radar'  blog.

Are you an Aussie or a kiwi currently battling endless lockdowns, feeling some serious envy as the rest of the world boxes on? We feel you! The current times are an incredible challenge for all and ho..........
END_OF_DOCUMENT_TOKEN_TO_BE_REPLACED

The 108th edition of the Tour de France is now well within grasp, set to get underway this Saturday in Brest. The 21 day race as always, travels over a highly demanding route including six mountain st..........
END_OF_DOCUMENT_TOKEN_TO_BE_REPLACED